Backstory: I joined the Disney Movie Club back in 2010 due to an awesome deal.  They were offering five blu rays for 1 dollar.  It came with a contract that in two years you had to purchase four blu rays at full cost but honestly, have you looked at the cost of a Disney Blu ray recently?  They are always expensive, never really on sale.  If it’s the “featured film” it counts towards your commitment purchase plus it’s also usually on sale.  Normally, they also have a buy one at full price get all other merchandise at 40-60% off.  I’ve loved the program and have been able to collect many of my favorite Disney films over the last few years.

Now, whenever you purchase a Disney CD, movie, or go to see a Disney movie, you can get points at the Disney Movie Rewards site.   Usually a Blu ray movie earns you 125 points.  So over the last few years, I’ve been saving up my points, and I was at about 4k. 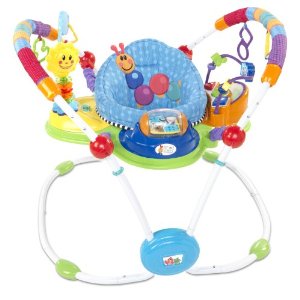 This is the Baby Einstein™ Musical Motion 2-In-1 Stationary Jumper And Entertainer. Normally 90 dollars, I was able to get it for “free” for 3k points. Obviously, by purchasing Blu rays, I have earned those points, but it’s a great rewards program that doesn’t HAVE to be in place.  This is why I love rewards programs!!

If you are interested in the Disney Blu Ray Movie Club, you can get code and site for the five Blu rays for 1 dollar deal here.
Tweet