When I first found out I was pregnant, one of my major concerns (as many women worry) was “How much weight am I going to gain?”  As you know, I lost a bunch of weight when I was diagnosed with Celiac’s and switched my diet to a gluten free one.

One of the blessings of being on a gluten free diet (and needing to be on one!) is that most of the foods I eat, do not pack on the pounds for me.  Even though most of my foods are higher in fat and sugar, my body/metabolism seems to chemically break down these easily. 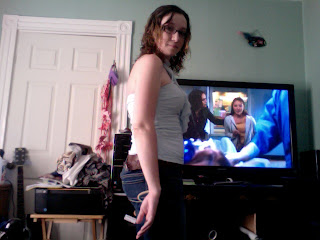 Now as of September 5th, I’ve found that my appetite has increased.  My husband and I rarely have leftovers unless we make enough TO have leftovers when before, I’d eat half a plate and be done.  Now, I have at least two or three plates worth of food.  I snack daily, take my prenatals, and my Zoloft.

I try to stay away from anything with gluten in it, of course, though there have been a few more slip ups than normal.  It’s just so hard to say no when work brings in tons of food, that I can’t eat, while being pregnant!!  But even with the few slip ups, I weighed in at 134.6lbs today. 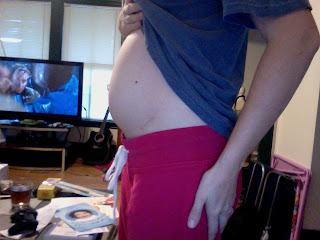 At nearly 16 weeks, putting on a total of 7lbs is not bad.  I also feel better knowing that because of my diet, I know I will drop any baby weight that I do gain.  So far, most of my weight has been put on in the belly which is good (vs all over) but also makes me nervous because I feel more like a pot belly pig than a pregnant woman =)

My main diet consists of 3 to 4 cups of fruits and veggies a day, 4 servings of protien, 1 to 2 cups of dairy, 3 to 4 cups of carbs/grains.  For example, my lunch today is:

I feel this keeps me pretty full and less likely to get hungry/nauseous during the day!  Have a fantastic Wednesday everyone!