So, I decided to give the brand Ian’s another try.  I had previously purchased these: 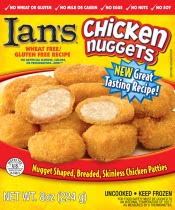 In my opinion, they weren’t all that great.  Now I know they have changed the recipe recently and they may not taste the same, but when I had purchased these, the outside coating of the chicken nuggets was very corny.   It tasted like a corn dog… except it had chicken in the middle and was suppose to be a chicken nugget.  My tongue and brain could not come to terms with this product and I ended up steering away from Ian’s products.

See the thing is, as you may known, gluten free food is super expensive.  So if I tend to not like one thing from a brand, I usually avoid the brand completely so I don’t waste any money (or in this case, forced to eat something that I wasn’t crazy about).  Life is too short and already I’m deprived of things that I DO want to eat, so my food needs to be tasty!

But I decided to give Ian’s another try when I saw these:

I loveeeeeeeee french toast and french toast sticks.  I remember Burger King’s french toast sticks fondly and was hoping to be able to find something sorta like them.  While these LOOK like them, the actual product doesn’t look much like this.  They look like small pieces of cut up toast (I think Ian’s products are geared towards children, because all the serving sizes are super small).  They were decent, but not squishy, more hard.  Slathered in maple syrup though, they were edible and I enjoyed them.  They just weren’t what I was thinking they would be when I saw the picture.  Plus they smell like apple-cinnamon instead of just cinnamon but maybe that’s just my nose.  Definitely better than the GF french toast sticks put out by Van’s which taste like saw dust…

I also got these but have yet to try them.  Again, they are really tiny, not big like they are portrayed to look on the box.  I will definitely let you know how they taste once I try them! 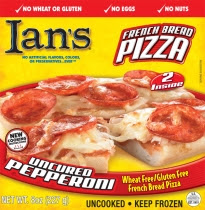 PS: the Ian’s French bread pizza was sooooo good. Small but you get 2 for about 7.50.