It was like it happened overnight.  One minute it was nice and warm; the next, that chilling crisp autumn air that makes you think of warm apple cider, hot apple crisp topped with melting vanilla ice cream, warm apple cider donuts right out of the microwave, pumpkin swirl bread, oooh and venti pumpkin spice lattes….

Sorry about that… got a little carried away, and to top it all off, I can’t have half of that!  Grrrrrr.

Well there is some solace here, we have perfected a gluten-free apple crisp here at my house AND I ordered some cinnamon swirl bread and cinnamon donuts from KATZ last night.  I’ve never ordered from them before, but they had a great selection of exciting new gluten free tries.  I’m pretty excited to see what I end up getting…

Also, my friend MB told me that you can ask for pumpkin swirl lattes caffeine-free from Starbucks!  Too bad there isn’t one on my way to work though…  Decaf pumpkin spice coffee with vanilla coffee mate it is!

At the end of last week and into this week, I started battling another cold/sinus infection that had crawled deep into my lungs and was hanging out there.  They could hear fluid in my lungs and could hear me wheezing.  Whether it was a nasty cold, pneumonia, bronchitis, or a lung infection, the medicine was the same: Z-pack.  So in lieu of doing a scary, potentially harmful chest x-ray, I was put to bed with a Z-pack and Robitussin. 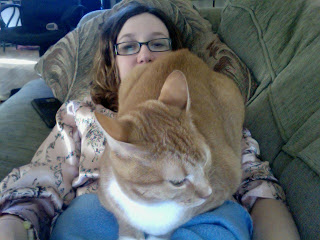 And thus, for a week, I became a kitty bed.  To be honest, he’s very comforting and very warm…

I’ve started to look at birth classes, but honestly, it’s really stressful.  First, you are suppose to do it in your eight month of pregnancy, which for me would be January 2013, but they don’t have a calendar up for the class yet.  Secondly, it looks like we are going to have to cram in five weeks of birth classes into one all day Saturday class.  I hope they go over all the same info and that it is not too overwhelming.  We just can’t go Wednesday nights.  That’s our time to spend with Em!!!  So anyways, I’ll have to contact the hospital and see if they have anything scheduled yet for January, and if so, if I can sign up.

Friday is the anatomy scan!  I’m so excited.  At 11am, we will be just getting ready to find out if it will be a boy or girl.  We are going to video tape it to share with the family =)

And lastly, here are some pictures!!!